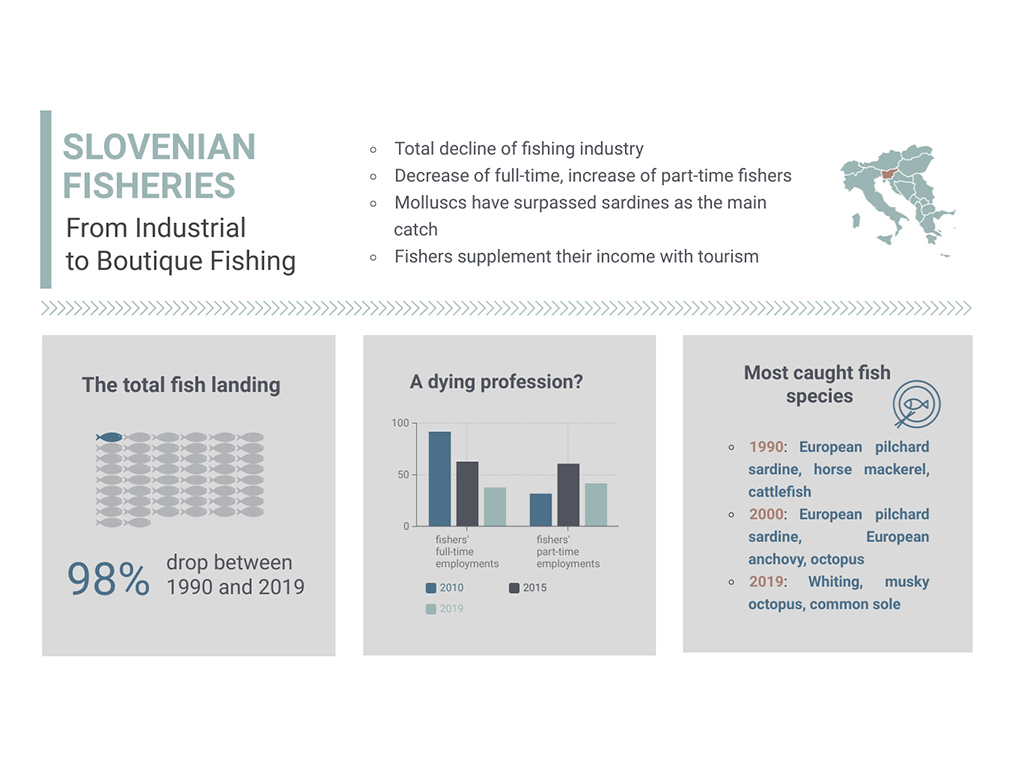 Source: Statistical office of the Republic of Slovenia 1970-2020, Infographic M. Bofulin on Visme

After the ‘golden years’ of the Slovene fishery in the 1980s, 1991 and the independence of Slovenia brought profound change. The once-thriving Delamaris fish canning industry – the driving force of the fishing industry on the Slovenian coast – saw a sharp decline due to the loss of the Yugoslav market. Without the largest buyer of fish, the fishers once employed or contracted to a factory became either independent small-scale fishers or moved on to other jobs.

The dwindling of their numbers was gradual but steady; in 2010, there were 92 full-time and 32 part-time fishers. Only nine years later, in 2019, the number of full-time fishers fell to 38, while the number of part-time rose slightly, to 42 fishers, partially due to full-time fishers substituting their income with other activities and becoming part-time fishers. In line with these developments, the number of small-scale fishing boats (a large majority of fishing boats in Slovenia) also declined from 163 to 121. The downturn of the fishery caused a substantial decrease in the volume of the total catch and transformed the way of fishing and the fish species most often caught. From almost 6,000 tonnes in 1990, the catch fell to only 120 tonnes in 2019. The European pilchard sardine highlights these transformations. Once the most commonly caught fish in this part of the North Adriatic, its numbers were constantly falling with two watershed moments; first, after Slovenian independence, and second in 2013, after the Delamaris fish factory was sold to several new owners. The new owners moved the canning facility inland and increased the quantity of fish imported from Spain. The dismantling of the last two boats of the Slovenian commercial fishing fleet in 2014 represents a symbolic end of the Slovene industrial fleet. In 2019, sardines lost their primacy among fish catch in the Slovene fishery to whiting and even molluscs (musky octopus), marking a new era of the small scale, even boutique, fishery in Slovenia.