Herring Clupea harengus (Atlantic herring), also known as ‘silver darlings’, have a long history as an important food fish in Northern Europe, being a staple food source since at least 3000 BC. Herring migrate in large shoals, spawning off the Scottish and Shetland coasts during August and September, off the English coast from August until October, and in the English Channel from November until January. During the Middle Ages, herring prompted the founding of Great Yarmouth, Amsterdam, and Copenhagen.

By the early 20th century, the fishing grounds off Great Yarmouth were the most productive in the world. Fishers followed the herring down from Scotland to towns such as Great Yarmouth. They were followed by Scottish fisherwomen, called ‘fishing lassies’, and merchants who sold herrings to the whole of Europe. In the heyday of the herring fishing industry in Great Yarmouth, in the East of England, it was said you could walk from one side of the River Yare to the other on the decks of the ships. During the 1970s, there was a massive decrease in the spawning stock biomass of herring; however, largely caused by over exploitation, followed by periods of poor recruitment. In 1977, the fishery was closed in the North Sea to safeguard the future of the stock. In response to management measures and a succession of strong year classes, the stock eventually recovered, and the North Sea fishery re-opened in 1983.

Herring is an oily fish very high in the long-chain omega-3 fatty acids EPA DHA, and vitamin D. Herring is still popular across Europe, particularly in Scandinavia, Germany, and eastern Europe. It can be served in numerous ways, and many regional recipes exist. It can be eaten raw, fermented, pickled, or cured by other techniques: salting, pickling, or smoking, for example, as kippers. Culinary traditions vary across cultures. For example, Scots like to smoke or salt them. The Dutch eat them raw. The Germans and the English enjoy their taste when pickled or in brine. One common characteristic that meant it was so popular across Europe was its relative ease of production and long preservation time through pickling, smoking, or marination. However, together with overfishing, the advent of fish freezing and easy-to-make meals such as fish fingers, and other modern preservation methods marked the end for herring as a staple food from the mid-20th century. The industry, therefore, never recovered in the UK after the ban on herring fishing was lifted in the early 1980s. 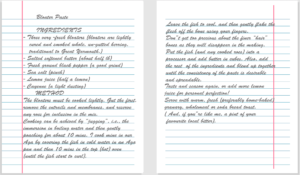 Herring has been celebrated in the art, literature, craft, music, and folklore of life across northern Europe. Herring is referred to and represented as the king in many stories, visual art and musical expressions. For example, a ‘red herring’, meaning something that throws you off course, is not just a turn of phrase. Red herrings are prepared in a special way, salted for three days and smoked for more than 10 days, causing them to smell strongly. They were used to get hunting hounds off the scent of their prey. The tails of three silver herrings (linked to the heads and bodies or three golden royal lions) are featured on the Great Yarmouth coat of arms. These are all signs of the importance herring once played in everyday life in the UK and across Northern Europe, which has left deep traces in the cultures and heritage of the area.